A joint research project between St Andrew’s Healthcare and the University of Kent has given one of our patients living with dementia the opportunity to experience what it’s like to walk with dinosaurs, for the first time and his reaction was amazing! The video was picked up in LADbible and Reuters, who shared the video to their millions of fans.

85-year-old Drew has been involved in a study to find out if virtual reality (VR) technology could vastly improve the quality of life of people with dementia by helping to recall past memories, reduce behaviours that might cause challenges and improve interactions with caregivers.

The results, according to his doctors, showed that VR has the power to increase wellbeing, and has ongoing psychological benefits. Eight patients aged between 41 and 88 who are living with dementia, including Alzheimer’s disease and Huntington’s disease, took part in the study. 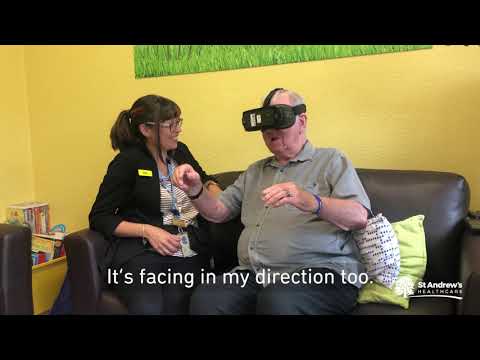 At first Drew watched a serene video from the Alps, in which he saw and heard cows and streams. He then experienced the dinosaur VR which he described as ‘amazing’ and became very animated and excited about seeing a prehistoric creature.

“I’ve never seen anything like it!” said 85-year-old Drew as he watched a leaf-eating brontosaurus walk towards him.

Drew, who’s originally from Scotland also likened the dinosaur to an infamous resident of the Highlands.

After watching the video he then returned to the ward to tell his healthcare assistant and fellow patients that he’d just been walking with dinosaurs.

“It was amazing to watch Drew come to life during the VR video. It demonstrates that VR can be another tool which helps people living with dementia to increase their quality of life.

“We hope in future that we can personalise this experience even more for patients in our care, so for example generating opportunities for people to revisit memorable places from their past.”

Each patient involved in the study used a VR headset to ‘visit’ one of five virtual environments. Sixteen sessions were monitored with feedback gathered from the patients and their caregivers.

Dr Ang from the University of Kent’s School of Engineering and Digital Arts, said a larger study was needed to validate the results, but the early indications showed VR had huge potential in this area.

“VR can clearly have positive benefits for patients with dementia, their families and caregivers.

“It provides a richer and more satisfying quality of life than is otherwise available, with many positive outcomes.

“With further research, it will be possible to further evaluate the elements of Virtual Environments that benefit patients and use VR even more effectively.”

For now, Drew says he’s just happy to continue exploring the other delights the virtual world has to offer him.

More information about the study can be found here.