A former soldier using the Veterans Complex Treatment Service at St Andrew’s Healthcare in Northampton has written a powerful poem to mark Armed Forces Day this Saturday 27 June. The day recognises the men and women who make up the Armed Forces community, from currently serving troops to Service families, veterans and cadets.

In the moving poem a Former Lance Corporal, who would like to remain anonymous, speaks about his past struggles with mental health, his recovery and his hopes for the future.

He describes his mental health journey as the Final Battle and speaks candidly about how he was too scared to speak up about the struggles he was enduring, but after years of not being heard, he finally sought help through the Veterans outpatient service on the Billing Road.

As part of the poem he writes: 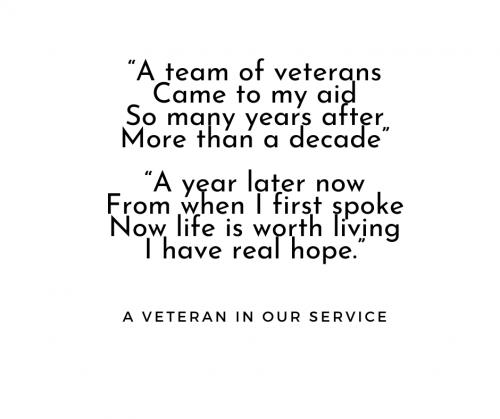 Dr Pete McAllister, who was a former army psychiatrist and now works at St Andrew’s, explained due to the nature of their job people in the armed forces will have been exposed to some really dangerous things, which “can have a cost” on their “own mental health.”

“There is a great deal of help out there you simply have to ask. If you’re now ex-forces, if you’re part of the Veterans community, let your GP know that you used to serve, that entitles you to additional care and special services just for you,” he added.

Melanie Coxall is a clinical psychologist for the Veterans Service at St Andrew’s and says it’s so important both serving and former armed forces seek help when they think something is not right.

“This Armed Forces day I want to remind all those serving past and present, how important it is to take care of your mental health. By just taking a moment every day to pay attention to your body, your mood, your thoughts and your behaviour. Asking for help is often the bravest and most difficult thing we can do. But it can give you a way of making sense of what’s happening, and to help you find a way out of your pain.”

St Andrew’s Veterans Complex Treatment Service (CTS) helps veterans who require intensive therapy for service-related conditions, on an outpatient basis. It is proud to support people with a military background, and we hope that as part of Armed Forces Day, that veterans feel more comfortable talking about the problems they face, and take the first steps towards accessing treatment. Our expert clinicians understand the barriers Veterans may have faced when accessing care previously, and work together with them to overcome the issues that have impacted on their recovery in the past.