As Featured on Inside Time.

It all started in 1975 when my mum gave birth to my brother. I thought it was going to be the best thing that ever happened to me. However it was the beginning of a traumatic life that led to me reoffending and attempting to take my own life on many occasions.

When my brother was just six weeks old, I heard him crying during the night. My mum was exhausted and as an 11 year-old trying to help I picked him up and cuddled him. He died in my arms.

Aged 12, I started offending; just petty stuff – nicking a bag of sweets or whatever and selling them in school. It was a distraction. It was a way to block out what had happened and try to be ‘known’ for something else. Then I got involved in football violence in my early teens, before ending up in a care home where I stayed until I was put in prison. I’d progressed from nicking sweets and my offending led to me being in and out of prison for many years after that.

But the chaos and darkness didn’t stop there. As an adult, when I was a doorman, something happened that brought everything flooding back to me. A young woman died in mine and my colleague’s arms after taking ecstasy. The second person to die in my arms.

It’s now 23 years since I was last in prison, however the demons in my head continued to cause countless problems for me – resulting in several suicide attempts.

I was 50 years-old when anyone started to show any kind of interest in my mental health. I had just continued to lead this life of darkness and rumination, with a ton of anger and hopelessness. My probation officer asked me if I could think of anything that triggered my anger and past offending; and I began to talk about my family history. It was only then that I was referred to St Andrew’s Healthcare for one-to-one counselling and it was there, in sessions with my psychologist Ellie, that I first opened up about how I felt and what I’d experienced as a young boy.

I started to understand that my offending behaviour was a way of escaping the idea that I was responsible for my brother’s death. I could put it all to the back of my mind when the focus was on me as something else – as a petty thief or armed robber. That created a new and different story to tell about me.

I was also able to work through the grief I had never processed over the death of my parents, and to talk about my feelings before I became actively suicidal. I’d be set homework to do after the sessions and would rush home to do it. Not to get it out of the way – but because I was keen to start learning more about my thoughts and behaviours. I also learnt new tools such as the STOP technique (Stop, Take a moment, Observe, Proceed mindfully) which has enabled me to recognise the signs that I’m getting angry such as stuttering or having sweaty palms. It allows me to stop that feeling before it goes too far.

As my work on myself started to show results, including me giving up alcohol, my partner started spending more time with me again. She could see I was working hard and making changes. I’ve also joined a pool team at the local pub – and have found that not drinking hasn’t stopped me having fun.

But it wasn’t just my relationships and social life that improved; through Ellie and the team at St Andrew’s I began volunteering as a peer mentor. My work involves setting the agendas for and often facilitating the sessions, as well as debriefing with colleagues afterwards. I’m now working towards taking on the role as a paid member of staff. It’s improved my confidence and my low moods are almost non-existent. 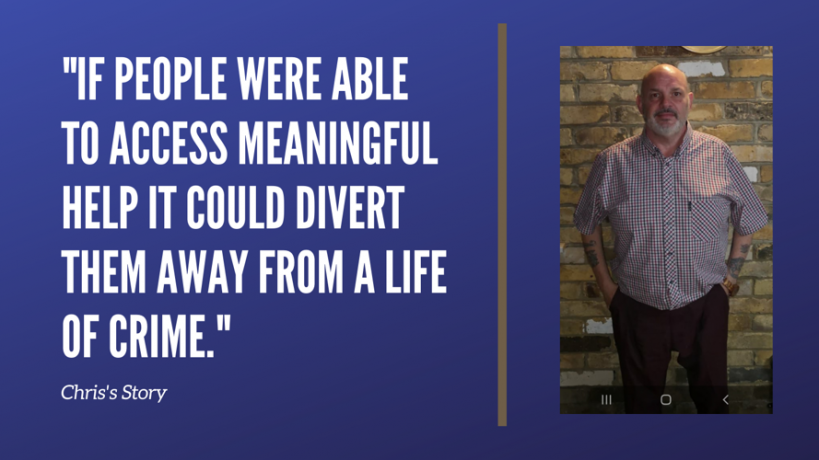 The most significant change, however, has been how I feel when I open my eyes in the morning. I want to get out of bed. I want to go for a walk or go to the gym or see people. It’s a huge shift from simply wanting to stay in bed, feeling as though there was nothing to get up for.

I can honestly say that if it wasn’t for my probation officer and Ellie listening to me I don’t think I’d be here today. But there needs to be more support like this. The amount of people I encountered in prison and on probation that have mental health problems is huge. If people were able to access meaningful help it could divert them away from a life of crime.

I’m still learning every day. But there’s hope now; my future is so much brighter than it’s ever been. Above all, I can now look forward to tomorrow.