Emma opens up about her mental health journey

From self-harm to stigma – What it’s like living with Borderline Personality Disorder.

Emma, (not her real name) 23, a patient at St Andrew’s Healthcare has spoken candidly about what life is like living with Borderline Personality Disorder. BPD, as it’s often referred to, is a type of mood disorder whereby people feel emotionally unstable, have disturbed patterns of thinking, impulsive behaviour and experience intense and sometimes unstable relationships with other people.

Chatting as she served people at the Workbridge café in Northampton, which provides vocational training opportunities to people with mental illness, Emma explained that before she was transferred to St Andrew’s she was in a crisis and feared she could have died if it hadn’t been for the help and support from staff at the Charity. 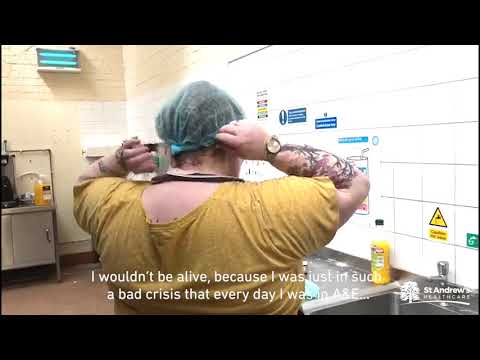 “A bad day would literally be not being able to get out of bed, you feel like there’s no point. Things like self-harm and suicidal behaviours come into play. You don’t talk to anyone. You get really snappy, you get irritable, it’s just really hard to be around people and kind of be normal.

“Honestly if I hadn’t come to St Andrew’s I would be dead. I wouldn’t be alive, because I was in such a bad crisis that every day I was in A&E, it wouldn’t have been sustainable, I just wouldn’t be here,” she explained.

She also opened up about the stigma attached to complex mental health conditions. Even though as a society we’ve come a long way in reducing taboos around conditions like depression and anxiety, Emma says there’s still a long way to go in demystifying what it’s really like for people living in a secure mental health hospital.

“I think people think you’re crazy and I think that doesn’t help anyone because it makes people not want to know you and actually most of the time you could be the most genuine person you’ll ever meet because you’ve been through so much,” she said.

“And people think you can’t do anything because you’ve got a mental illness, but actually you can do anything you want to do.”

Around 1 in 100 people have BPD in the UK. The condition affects men and women equally, but women are more likely to be diagnosed with BPD, often because men are less likely to ask for help.

However as Emma explains, while it’s quite a complicated condition, if you get the right treatment it doesn’t need to limit your life.

Her only hope, she says, is that when she goes back to University that she feels accepted, and is not stigmatised for having a mental illness.