Following the reports of his diagnosis, the U.S. President has been treated with a number of drugs for COVID-19 which he has referred to as a “cure”, but there is a lack of clarity of what these are, or whether they are likely to be effective. Here is a list of the drugs, and what we know about them.

Monoclonal antibody therapy: This is a combination of antibodies, made by the company Regeneron. Monoclonal antibodies act by attaching to the virus and essentially neutralising it and removing it from the body. Studies have been carried out on people in the early stage of the disease who have mild symptoms and the results appear to be promising. However, these have not been analysed in detail and the drug is not yet licensed for general use. I believe that the application for their approval has recently been submitted to the regulatory authorities in the US where it is under consideration. The President obtained it directly from the company under a “compassionate use” programme which allows unlicensed drugs to be prescribed.

Remdesivir: This drug is classified as “antiviral” – it acts to decrease the rate of replication of the virus in the body. It was first produced as a treatment for Ebola but has now been demonstrated to have benefit for people in the early stages of COVID-19 by preventing the development of the virus in the body. It appears to decrease the time that people exhibit the symptoms, but not the overall survival rate. It has been approved for use in the clinic and appears to shorten the duration of the symptoms.

Dexamethasone: This is a steroid that dampens down the immune system. The potential benefit was identified in the RECOVERY trial carried out in the UK. However, it has been demonstrated to be most effective in people with more advanced symptoms when the inflammation is at a higher stage. If given to people with mild symptoms, it may even be harmful as it may prevent the body acting directly against the virus. The evidence suggests that it may decrease the time that a person has the symptoms but it does not appear to have an effect on the death rate.

Is there evidence for any benefit from using masks at school?

Children are less likely to develop the symptoms of COVID-19, although there haven’t been sufficient studies to confirm whether they are more or less likely to get or pass on the virus. There remains the possibility that they could spread it throughout the wider community. This is one reason why the schools remained closed throughout the lockdown. Some schools are now erring on the side of caution and recommending that the pupils wear masks in enclosed spaces. There are many diagrams to explain the benefit of masks, but I think that this demonstrates it well. 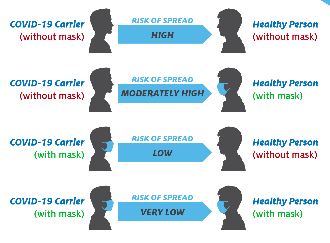 Essentially, the primary benefit of a mask is to prevent somebody with the virus from spreading it. So while a mask may not prevent you from breathing in an infected airborne droplet, if may well stop the droplets you expel through sneezing, coughing etc. There is also evidence to suggest that people who talk loudly or shout are more likely to spread the aerosol that would contain the virus, which may be relevant in schools!

What are the testing figures currently telling us?

In the last few weeks, the numbers of cases reported have increased in a number of European countries although they have remained generally stable in the UK. However, the number of COVID-related deaths and seriously ill cases has been steadily falling. What does this actually mean? The challenge is that we are doing many more tests than previously and so are diagnosing people that would otherwise not have been identified, as most of them have very few symptoms or none at all (asymptomatic). This is partly related to the Test and Trace programme, but also proactive testing when a cluster is suspected, as at the Greencore sandwich factory. At the early stage of the COVID-19 outbreak, primarily people who had been admitted to hospital or referred by a GP were tested. So it is not possible to compare the current figures with those reported in April and May. It is important that we monitor the current overall figure as this will reflect lifestyle factors which may influence the transmission of the virus within the community. In Spain, for example, the current spike is likely to be associated with an increase in those on holidays who were unable to maintain the social distancing limit. Also, monitoring local spikes should allow for the identification of specific factors associated with the increased number and therefore inform the introduction of measures to deal with them. It is also worth remembering that, whilst the death rate is now negligible, the long-term effects of contracting COVID-19 remain unclear.

Where are we with vaccines?

Although there are reports from Russia that a vaccine is now in use in the clinic, we have no evidence that it actually works as none of the research behind it has been published. There are a number of trials taking place around the world. It is important, however, that all of the evidence that the vaccine is safe and effective has been obtained before a licence for its use in the clinic is approved. Any political pressure to approve a vaccine prior to the completion of proper testing should be resisted. We have one chance to get it right and we need to be confident that the vaccine works and is safe before we allow it to be made available to the wider population.

Could you get COVID-19 a second time?

There have been reports today of a person developing the symptoms of COVID-19 for a second time. Although this is a single case, it does raise the possibility that the immune response to the condition may be short lived, at least in some people. Although, another possibility is that many people have contracted it for a second time, but are also asymptomatic, so have gone undetected. Previous studies have suggested that the immune response in people who have a milder form of the condition may be weak and decrease over time. This may explain why it could be possible to develop the condition a second time. More importantly, it provides information about the development of a vaccine. In the initial study of the Oxford vaccine, a booster dose was administered after one month and the immune response was maintained up to three months. This is now being followed over a longer term. However, if the immune response is not maintained, it may be necessary to give an annual booster, which will be a challenge.