37-year-old Katrina was delivered the devastating news eight years ago that she would never walk again. She’d lost the power in her legs and was wheelchair bound following an incident in 2011 where she tried to take her own life.

“The branch broke and I fell about 20 foot,” she recalls.

“I fractured my T12 and damaged my spinal cord.” 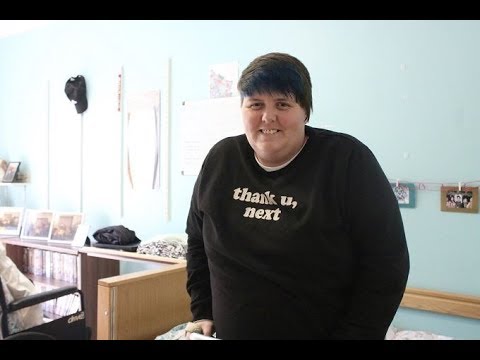 Due to the trauma experienced from the suicide attempt and her losing function in her legs, Katrina’s mental health continued to decline. By 2017 she experienced further weakness and paralysis and then lost movement in her arms, rendering her unable to feed herself.

She was eventually diagnosed with Functional Neurological Disorder (FND) a psychological condition which means that the brain stops sending messages to the body. The depression, suicide attempts and FND were all brought on by problems she encountered when she was younger.

“They say it was brought on by trauma… stuff that happened to me in my childhood that I didn’t speak about.”

“My brain, more or less, couldn’t take anymore,” she explains.

Katrina was admitted to St Andrew’s at the end of 2018 and spent months working with her physiotherapist Jyothi Kraleti, and the mental healthcare team to improve her mobility and function.

She has now regained complete movement in her arms and is able to walk using a frame, and is working towards walking completely unaided.

“I was told I was never going to be able to stand, let alone walk again, and now I’m able to stand on my own. It feels fantastic, it’s just great.

“The physios of St Andrew’s have been absolutely fantastic. If it wasn’t for them I wouldn’t be where I am today,” she says.

Katrina is still working on improving her mental health to reduce her feelings of depression and anxiety, but she says she is determined to get better so she can teach football to young players. Her advice to others suffering from mental health problems is to keep going and believe that you will get better.